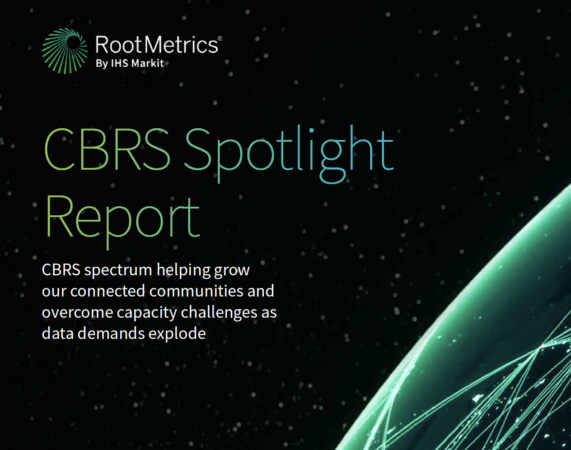 The word is out. CBRS is adding measurable performance and speed to mobile networks. Earlier this week, Sascha Segan published an article in PC Magazine with the headline “Verizon’s New 4G Beats 5G, Big Time.” Segan tested the Verizon network in two New York neighborhoods, and found that the Verizon network utilizing midband CBRS spectrum outperformed their 5G network using millimeter wave spectrum. As he notes, this bodes well for the future when more 5G CBRS radios and devices become available. This was an interesting individual test performed in his local neighborhoods.

Today we are extremely pleased to see the publication of the CBRS Spotlight Report from RootMetrics by IHS Markit, which offers hard data on CBRS performance to the wireless industry for the first time. RootMetrics combines scientific data with real-world mobile performance insights to provide an independent view of carriers’ performance. Based on RootMetrics testing in the second half of 2020, the report clearly demonstrates the rapid growth of shared spectrum use and points to the strong performance gains that wireless carriers can achieve when adding CBRS to existing spectrum.

RootMetrics’s live testing of Verizon’s network in Philadelphia, shows that the carrier had added considerable bandwidth using CBRS, more than doubling available spectrum from 45 MHz in the first half of the year to up to 95 MHz for its LTE services. There is a lot of great information in the report to absorb, but for me the crux is summarized in this one chart, which shows that Verizon’s deployment of CBRS led to faster speeds for its customers. 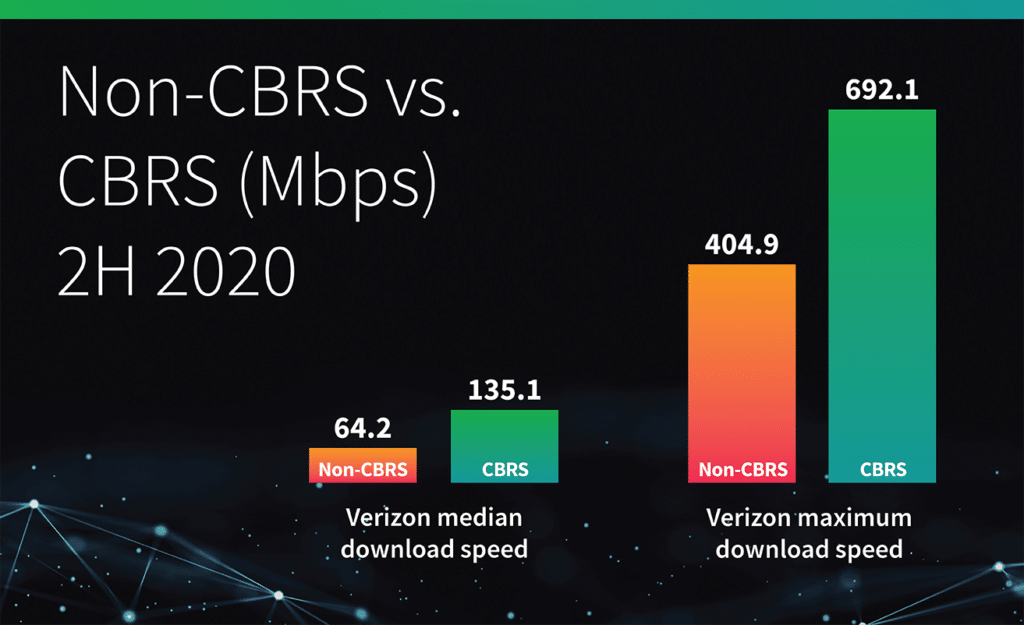 As the report states, “With the desirable and powerful mid-band 3.5 GHz spectrum at the center of the growing CBRS movement, the acquisition of CBRS spectrum by mobile networks and a host of other organizations could mark a watershed moment on the path toward realizing the true potential of 5G and the full growth of our connected communities going forward. Adding mid-band spectrum to low-band and/or mmWave deployments can augment performance while also helping networks most effectively utilize the best combination of 5G and LTE resources.”

As RootMetrics notes in the report, the benefits of CBRS deployment are many. It is far cheaper than FCC-regulated spectrum, it can be tailored for specific use cases with highly customizable security solutions, and it is the “Goldilocks” of mid-band spectrum, residing in the mid-band frequency band and (3.5 GHz), offering the upside of both low-band and mmWave spectrum. It brings connectivity to rural and other underserved areas with providers like No Limits Broadband, also highlighted in the report, and powers industrial IoT (IIoT) solutions such as the recently-announced 5G private network deployment at the Marine Corps Logistics Command warehouse operations in Albany, Ga.

The report notes that commercial enterprises, universities, and others in the public sector are expected to benefit from CBRS spectrum to provide private wireless networks for business and industrial operations, which will be crucial in cases where Wi-Fi or existing cellular networks have proven unreliable and/or ineffective. Moreover, CBRS provides the additional connectivity and reliability needed for Industrial IoT, smart factories, and other applications that depend on increased capacity and coverage.

The benefits of CBRS shared spectrum deployment and the large gains the entire industry made in the second half of 2020 are undeniable. This report confirms what so many have already come to acknowledge, that shared spectrum is a critical enabler of 5G service growth and that 2021 will be a complete game-changer for carriers, WISPs, private wireless providers, and both business and consumer users of new high-speed service offerings.